My flight is booked and paid for, I have my visa in hand and my bags are nearly packed; but all of this still doesn’t feel real yet. I have all these physical reminders that it’s actually happening to me, but it feels like it’s happening to someone else. I can’t believe how fast time has flown by! This time last year my little adventure was just starting to form into an idea seed. I was still Vegan- I know “everybody hide your mink! Incoming crazy lady at 2:00!” I was still living with the most amazing person I’ve ever known- this part makes me sad. It’s weird how so many things change in a years time, and yet how much they stay the same. For example, in one year I turned my boyfriend into my roommate, made the decision to move abroad, moved out of said apartment, got a new job, then left said job and then the country. But despite all this and my greatest efforts to convince myself otherwise, I still love Kyle more than I have ever loved anything in the entire world. Ever. When I made the decision to leave I tried to believe that I didn’t love him anymore. I thought that it would spare us both from the pain that would result from my absence. I didn’t want to hurt him- and since I was doing this out of purely selfish reasons, I didn’t want him to be the reason that I didn’t fall through with something I’ve always wanted. It was the hardest and the worst thing I’ve ever done and I still feel terrible about it every day.

People keep asking me if I’m getting excited, and I don’t really know how to reply because I’m feeling so many conflicting things all at once. One minute I’m over the moon with excitement, and the next thing I know I’m crying and feeling like the worst person in the world for leaving him behind. I find myself making lists of the things I want to do (it’s kind of my thing. I usually have around 10 active lists going at any given moment) and then experiencing crushing anxiety “What the F*c! am I doing? I have no idea what I’m doing! SOMEBODY HELP ME DO THIS!” Anyone who knows me, knows that I have terrible anxiety “issues”, an equally terrible fear of flying and claustrophobia. An ideal situation for a 24 hour flight across the world.

My heart honestly goes out to the poor soul who has to sit next to me on the plane. Kyle will have just dropped me off at the airport, in what I’m picturing as a cliche’ and drawn out, overly dramatic goodbye. “Here’s looking at you kid” “never let go, Jack!” commence letting go? Or perhaps a more fitting goodbye: E.T. “Ouch!…I’ll be right here” lol, in my head I’m E.T and he’s Elliott. If you have no idea what I’m talking about, you’re an uncultured swine and I pity the fool! Learn yo’self: https://www.youtube.com/watch?v=75M1XXEZciU. Directly after this academy award winning goodbye, I will be forced to spend 10 hours in a tiny metal tube with hundreds of people- who for all I know have ebola or some unmentionable and contractable disease. These will be the people who have to console me when we’re careening through the sky and defying the laws of physics… It actually sounds like hell, though. You can barely stand, there’s probably a baby screaming (and I don’t blame it, either) or a youth kicking the back of your seat, the food is crap, there’s never enough leg room, and there’s a 50-50 chance something will go terribly wrong and you’re never heard of again. Brings a whole new meaning to “all we are is dust in the wind.” I can see it now: I’m falling out of the sky and all I can hear is that one song by Sarah McLachlan and I’m like “I AM going down with this ship, you insensitive buffoon!” and she’s like “In the arms of an angel, may you fly from here…” and I’m like “I’m not flying, Sarah! I’m falling to my death!” Ugh. Can’t wait guys, this is gonna be great! You can always count on Sarah to make a minutes’ time sad, and dramatic. *Cue MSPCA commercial- or whatever that rubbish is.

So if by some miracle I survive 2 10 hour flights, I’ll have finally landed in Seoul! I’m smiling on the outside but inside I’m shitting my pants like that screaming baby I so desperately want to punt- because I have no idea what I’m getting myself into. I have no idea what to expect, so I’m not expecting anything. I think in the end it’ll be worth it, and I’ll be so glad I did this. I just keep trying to picture my life in a few weeks and all I can picture is those Chinese take-out boxes. Something I’m really excited about though, is the fact that karaoke is taken VERY seriously. So I feel like the people there already understand me, you know? It’s interesting to me, because Americans have no problem getting in your face about things they don’t know Jack about! Like politics, and how to effectively get a point across to the masses. Like that one time people thought it would be a good idea to protest by chaining themselves to cement filled barrels, on a major Boston highway, and refuse to move because a criminal disobeyed the police…Now don’t get all up in arms, here! It’s just so funny to me that Americans will do things like this, but then someone proposes karaoke and all of sudden no one has anything to say! Just silence. It’s like, you have the courage to share your opinions without fact checking, but you won’t sing a song? Why? Because you’re afraid to look stupid? Take off those dumb hipster clothes that no one understands, first. I digress.

Getting back to the point lol, I am truly excited about my adventure! I can’t believe it’s happening to me yet, even though I leave in 2 days. I’m going to miss all the people I’m leaving behind, but I’m excited. I’m finally doing something for myself, and living life the way I want to. It’s truly a refreshing change of pace! If I can share a little nugget of wisdom to all my ladies reading this, it’s that you can’t spend your life living for someone else. This isn’t 1874! If you have the virtue of living in a special part of the world, you have rights! We can vote, have careers, own property, even decide who we get married to.

Knowing this, why is it SO revolutionary to hear that a female is putting other things before starting a life of domestic and marital bliss? I just don’t get why some people question my decision and are like “but what about having babies? Babies are the most important thing you know! If you go over there, you might become impotent and, well, what would you ever do, then?! BABIES! But the babies though!” Listen, I don’t want kids. I like hanging out with them and all, but the best part is giving them back and going home alone! This move isn’t permanent, and when I come back I’ll want to continue my relationship- childless. If the time comes where that changes and I’m impotent, I’ll go back to South Korea and pick out a lucky child to come home with me. “You’ve won! How do you feel?! Release the confetti!” But until then, I’m going to continue living for myself. By my own rules. I encourage everyone, especially women, to go out and get what you want. No one is going to hand things to you, but even if they did why would you want that? Just remember ladies, when you’re competing with the privileged gender, there’s no crying in baseball! 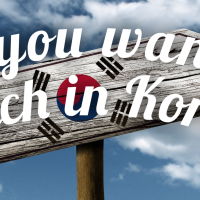